Honey has a shiny new truck parked across the street from the College of Engineering on 12th Street at Norris. I was drawn in by the sign advertising chicken and waffles and vowed to return one day to try them. Now let me tell you… this may be the best fried chicken I have ever had from a food truck! This will definitely quell any fried chicken craving you may have. You may remember this truck when it looked more like the photo below. I never tried the food then, but I had been meaning to check it out.

On my first visit, I was not in the mood for waffles, so I tried the chicken avocado wrap instead. The chicken was breaded with panko breadcrumbs and spices, dressed with a small amount of sweet chili sauce, and wrapped with some perfectly ripe avocado. Battered fries were a great companion to this meal. The chicken was juicy and crispy. I’m definitely having this meal again!

On my next visit, I decided to try the chicken and waffles. The waffles come with strawberry or bananas. I picked bananas. You can also get the waffles plain. When I got back to my desk, I saw the packets of “fake” syrup in my bag. I know the corn syrup version is popular, but I’m more of a maple syrup type of gal. I do understand that that would be harder to serve on a food truck, so it is understandable to have the other, prepackaged kind. I tried it, but unfortunately the waffle was not very crisp. It was kind of soft under the chicken and huge pile of bananas. I usually like my waffles to be a little crunchy with a soft middle, but these were pretty soft all around.

However, the bananas were delicious and there were three large pieces of chicken on top of the waffles. The chicken and bananas alone were pretty filling. I did eat some of the waffle, but did not finish it. They do have some other things on the menu I’d like to try such as the shrimp avocado wrap and the hangover burger, which is a burger with an egg on it. For the vegetarians, they also have a veggie burger. Breakfast items include french toast, waffles, breakfast sandwiches, and hash browns. 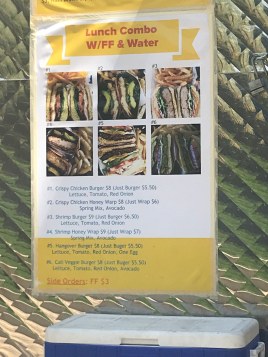 Temple News produced a video last year and spoke with the owner of the truck. (You can view the video here). She seems like someone who truly enjoys preparing the family’s special chicken recipe and sharing it with the world. I will definitely return to eat some more of this chicken!

Location: On 12th and Norris Streets (across from the Engineering building)

What I tried: Chicken Avocado wrap and Chicken & Waffles (with Bananas)