The week of Christmas at Temple was pretty much a ghost town. It was rainy and the students and faculty had all vacated the premises. Many of the administrators and support staff also took the days off preceding the Christmas holiday to extend the Winter Break. So as you could imagine, there was very little open on campus for food choices. Luckily for me, those hardworking fellas in the halal carts were still around and happy to serve.

Choosing a halal cart is difficult for a newcomer at Temple, being that there are at least three on Montgomery Street alone. Two of the carts are parked on Montgomery, just past 13th, in front of the Tuttleman Center. The third cart is parked next to the Bagel Hut on Liacouras Walk. That one claims to have higher prices due to inflation, so it costs a dollar more for platters than the other two.

On my first week at Temple, before I started this blog, I ate at the one on the corner of 13th and Montgomery. It was delicious, but after I told my coworkers I had eaten there, they told me I had eaten at the wrong halal cart. They said the one next to it was the best one. I was skeptical because the food I had was pretty good, and you get a platter of food and a canned soda for only $5. But I am humbled to say that they were right.

Vegetarians have many options here, from the Falafel platter, Falafel on pita, or veggies over rice. Other meat items I would like to try are the gyro selections and the lamb, although I’m not sure anything will be better than the chicken.

The price at the second halal cart is the same, but the reason why it is better is because they ask you if you want chickpeas. These chickpeas are stewed with potatoes, lentils, and carrots in a flavorful sauce until beautifully tender. I ordered the chicken and falafel with chickpeas, white sauce and hot sauce. It was ready almost instantaneously, I barely had time to take photos of the cart (of course, this may be due to the fewer customers).

The chicken is tender and bursting with turmeric, coriander, and cumin. The falafel is moist inside and crispy on the outside, adding a delightful crunchy texture. A bed of rice with a hint of saffron soak up all these exotic spices. Even without the hot sauce and white sauce, this plate of food would have been full of flavor. Fresh lettuce and tomato accompany to refresh the palate between spicy bites. Because of all the blending sauces and toppings, the food is not the most attractive thing in the world, but it sure is tasty. 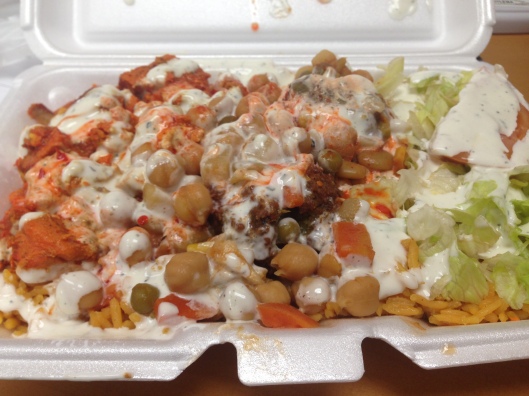 After eating this beautiful mess, I think all my future halal cart cravings will point me back to this cart instead of the others. I ate every last grain of rice on my plate.

What I tried: Chicken and Falafel with Chickpeas, hot sauce, and white sauce

Do you have a preference on halal trucks? Are we wrong in saying this one is the best? Let me know by sending a message or leaving a comment. 🙂