I have been on hiatus from this blog because I recently moved and then subsequently got sick. Anyhow, on my first day of my new commute I accidentally got off the bus at the wrong stop and noticed this huge kawaii panda adorned with a jeweled crown and hugging bubble teas. I loved the art on the truck and it seemed totally fitting for a food truck outside the art building. I knew where I was going to have lunch!

Bubble tea is my thing! I just realized that I didn’t take a photo of my amazing Honeydew bubble tea that I had from this truck, but if you’ve seen one bubble tea, you’ve seen them all. Just know that it was delicious! I also like that you can adjust the sugar level. I ordered mine normal or 100% sugar level just to test it out. I think I could probably drop it to 75% or even half. There are many flavors to choose from, as well as smoothies and hot tea. You can also add other toppings such as lychee or rainbow jelly, popping boba (a bubble filled with juicy goodness) and mango pudding (I have no idea what that is but I’ll try it).

The specialty teas include some of these toppings with adorable names, some based on comic book characters:

The food was a little disappointing. I ordered the braised pork belly bao bun and the 6 piece gyoza, which is a japanese dumpling. The bao bun had good flavor but the meat attached to the pork fat was super tough and I could barely bite through it. It was also a touch over-salted. The peanuts did add a nice texture on top. The gyoza was deep-fried, which I was not expecting (I have always had these steamed or pan-fried). However, it did taste good with flavors of sesame and ginger, and I liked it better than the bao. 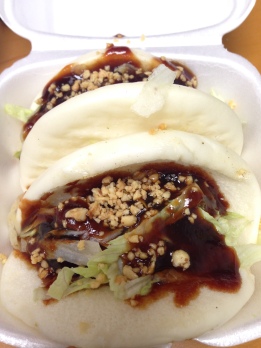 I’ll be back for more tea combinations, but I don’t think I’ll eat the food again.

Location: On Norris St between 12th and 13th St., and periodically at Drexel University and UPenn (33rd & Market). Follow their Twitter and/or Facebook for location updates.