“Best gyro you will ever have!” Ernie proclaimed proudly as he handed me my lunch. “I’ve been here running this truck for 37 years, I’ve seen people come and go. But I love it! It is the best thing when people come back and tell me the food is good.” I smiled and thanked him for my lunch. It’s great to see people who love what they do, and I was optimistic about his food. But there was something else that excited me about this warm brown bag of food I was clutching and about to ingest.

When I first moved to Philly, I called a local pizza spot to have food delivered. I was in the mood for a gyro, so I called to place my order.

“A gyro platter. Yee-roh,” I enunciated.

“Ohh.. You mean a gyro. JAI-ROH,” she repeated for emphasis.

I encountered this correction nearly everywhere I went. And almost every time, the gyro would be some kind of previously frozen, processed strip of meat reheated on the grill. Over time, I began to pronounce it the incorrect way also, despite knowing that in Greece, while there is some variation, it is usually pronounced “yee-roh” but Greek-Americans sometimes call it “jee-roh.”

Ernie called it a jee-roh. He told me he handmakes his gyro and the tzatziki sauce from scratch and everything is fresh. This was a hint to me that this wouldn’t be any ordinary gyro. This is the real deal. And let me tell you, this is the BEST GYRO I have ever eaten in my life. So great, in fact, that I returned twice in one week to get one. Perfectly spiced and slightly crisp yet moist, the meat is succulent and flavorful with each bite. Only $5 for the sandwich. 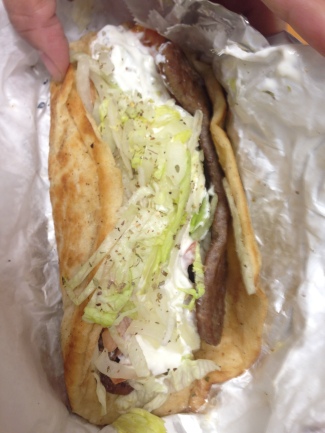 For my second visit, a couple of guys were ordering a cheesesteak and one snapped a pic as the large sandwich was set in the window to be wrapped.

Well, that’s quite a statement. I haven’t had Ernie’s cheesesteak yet, but I’m not the best judge of them. It did pique my curiosity, however. Burgers seem to be popular here too. I heard three guys in a row order one.

They don’t have many sides here but offer chips, sodas, muffins, and a plethora of snacks and candy. Breakfast items such as omelets and bagels are also available, as well as hoagies and salads. One cold morning I had a bagel with sausage, egg and cheese and that was a tasty and filling breakfast.

Location: On Montgomery and 13th Street

What I tried: Beef gyro, Sausage egg and cheese bagel

Click on menu thumbnails below to see all the items they offer.