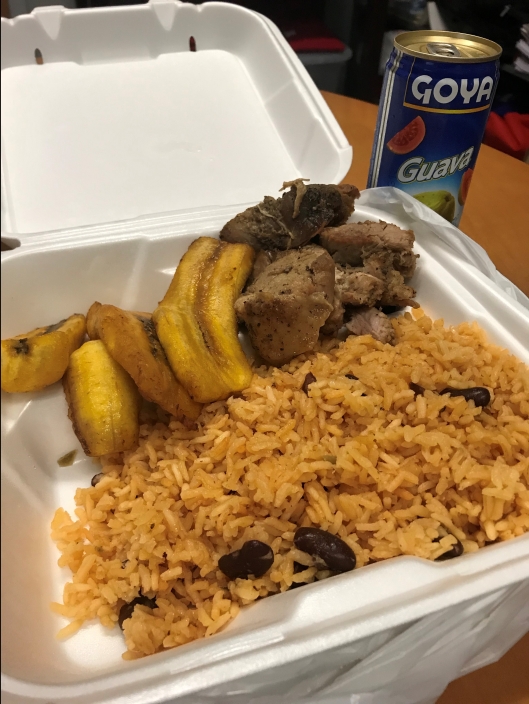 Back in 2016, I reviewed 4Brothers Loco Flavor food truck in this review. At the time, the truck was pretty new and were probably still ironing out the kinks of their menu. The owner of the truck found my review are requested that I come back and give it another try. I am of course always game to try things again! The review I wrote wasn’t necessarily bad, but I am happy to report that the new menu they have is much better! Even the truck itself looks better with new signage and easy to read choices mapped out for you (click to enlarge photos): 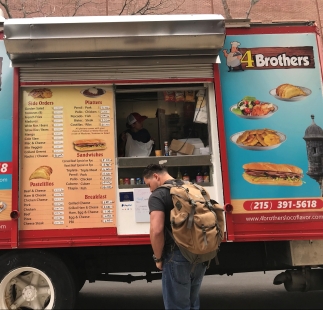 I opted for a pernil platter (pork). For the platters you get a choice of protein including pork, chicken, fish, steak, or ribs (!). I was pleased to discover they not only had plantains on the menu this time, but two different preparations! Tostones, which are twice fried and more savory, are typically made from green, unripened plantains which are starchier and smashed flat after the first fry, then fried again. They end up being more like a salty chip than a banana flavor. The second preparation is maduros, which are ripened until sweet and fried once. I opted for the maduros this time because pork pairs well with a sweet plantain. With the platter you also get to choose between white rice or yellow rice (and beans). Ask for hot sauce on the side to spice it up!

The pernil was very tender and flavorful and the plantains were cooked to perfection! I was also happy to see more menu items at a very reasonable price point! Sides such as mac and cheese, veggies, and french fries for just $2 each. They also expanded their varieties of pastelillos, which are fried pockets of dough filled with toppings such as cheesesteak, pizza, and ham & cheese. The Tripleta sandwich that I raved about in my original review is still on the menu, along with other sandwiches like the Cubano and the Tilapia fish sandwich. They also have many rotating specials posted on their Facebook page.

For drinks, they have a large selection of Goya nectars, Jarritos, Snapples, and cans of soda. Other improvements are the addition of payment methods, including Paypal and Credit cards. Huge thumbs up from this happy food truck eater. I’ll be back!

Location: On 12th and Norris Streets

What I tried: Pernil platter